Bullying Is Not Cool: Phil Heath Speaks Up to Protect a Transgender Bodybuilder Janae Kroc Amidst

Cyber-bullying is a serious problem that affects not only common internet users but also stars, celebrities, and outstanding sports characters. Janae Kroc Amidst former bodybuilding enthusiast and an ambitious powerlifter became a real internet-legend after changing her gender some years ago.

Unfortunately, the great fame attracted not only positive changes to Janae’s life. Alongside an army of supporters and fans, the former powerlifter faced lots of criticism and hates. Each post of Janae results in dozens of hateful comments and messages. Internet trolls and haters deny her great sports achievements and activity and criticize the celebrity’s decision and appearance.

In order to change the situation, two famous colleagues of Janae decided to speak up for her protection. Mike Rashid who knows Janae for years advised all haters to pay their attention to the beautiful personality of the former powerlifter, telling that she’s “an awesome parent and a good person”.

The former Olympia champion Phil Heath also left his comment to support an old friend. “I’m proud of you for living your truth.”, – he commented under Janae’s photo, explaining his position. Phil mentioned that he knew Janae for years and appreciated her strength and professionalism. Perhaps, such support won’t stop bullying in Janae’s account. However, it will definitely give her the power to take it all. 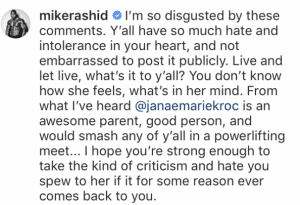 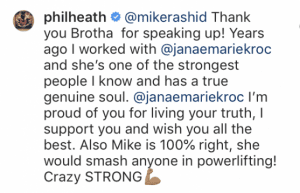